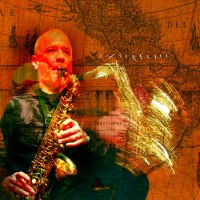 Miguel Villafruela holds degrees in Saxophone Performance and Education from Cuba’s Escuela Nacional de Música, where his teachers were Osvaldo González and Carlos Averhoff, the Paris Conservatory of Music and Dance (First Prize under the guidance of Daniel Deffayet), MA at the University of Chile and Doctor of science on Arts (Music), from Cuba’s Instituto Superior de Arte, Universidad de las Artes.

Laureate of the Young Artists’ Jury in Bratislava (1979) and the Léopold Bellan Competition (Paris, 1980), he has pursued an outstanding career as soloist and recitalist, including performances with numerous orchestras in Europe and Latin America. He has been guest artist at World Saxophone Congresses held in Valencia (1997), Tokyo (1988), Washington (1985) and Nuremberg (1982), and also at the Saxofonías (Angers, Francia, 1990) organized to commemorate the 150th anniversary of the creation of the saxophone.

Owing to his qualities as a performer, and his pioneering pedagogical work (founder of Saxophone Studies at Cuba’s Instituto Superior de Arte, (1992), at the University of Chile, where he is Full Professor, (1993), and at Santiago’s Pontifical Catholic University (1999), Villafruela is recognized as the dean of classical saxophone teaching and performance in Latin America

Miguel Villafruela is frequently called upon to offer master classes at conservatories and universities (Conservatoire Royal in Brussels, 2016) and a jury of competitions and examinations of musical institutions (International Saxophone Competition Adolphe Sax in Dinant, Belgium, 2006 , National Conservatory of music and Dance of Paris, 2016).

Among the many awards and recognitions from organizations in his homeland, Villafruela has received the Order for National Culture from Cuba’s Ministry of Culture and he was recognized by Chile’s Sociedad Chilena del Derecho de Autor in 2001. In February, 2002, the Instituto Superior de Arte, Universidad de las Artes de Cuba awarded Villafruela its Diploma for Artistic Merit, and in November, 2003, the University of Chile distinguished him as Mejor Docente de Pregrado.

Miguel Villafruela is an artist sponsored by SELMER PARIS, VANDOREN and BG companies